It seems there is nothing that can stop the technological juggernaut that is Mammoth Enterprises as it absorbs another industry leader.

Nerve Robotics, for many years at the forefront of cybernetic and independent mechanics has been scooped up for a staggering $24.8 billion CSD.

“With most of our core products now intergrating Mammoth gel drives, it was a logical merger for both companies,” stated outgoing CEO of Nerve.

Tom sat in an auto-bus along with a bunch of other teenagers and twenty-somethings wearing the same uniform of bland green jackets and pants.

Through the window, behind the crowd of parents waving goodbye, Jack stood glaring at him. He didn’t want Tom fighting for ‘the effing status quo’.

The bus took them out of the city, driving slowly through the suburbs, stopping to collect more volunteers. He woke up drooling on someone’s shoulder, curly hair tickling his nose. Tom straightened up in alarm.

‘I’m sorry,’ he said to the narrow-faced woman with dark curled hair.

‘You should be. Look at this drool patch.’ Tom peeked shyly at the dark patch on her uniform.

Fingers circling and scribbling over his skin as she caught fire.

The bus’s engine changed tone to a lower hum of increasing effort.

‘What are you reading?’ he asked her.

Police departments throughout the district of Anaheim, California, took up pen and paper today after their computer systems were taken over by hackers in the early hours of the morning.

Officers arrived at work to crowded waiting rooms and chaos with computer screens flashing an animation of the American flag in flames. Official websites were replaced with looping videos of police violence sourced from the open web.

At 9am the chief of police and FBI shut down servers and returned to manual logging of case files with pens and photocopies of template forms. Browsers were redirected to the national emergency service which remains secure.

In a one-two combination, a group tagging themselves ‘American Anarchy’ hacked public video displays across the district and replaced them with a message encouraging citizens to help topple the ‘system’ by everyone committing a petty crime. A call to arms which has been taken up en masse.

‘The pigs are on their knees. If enough of us commit an act of civil disobedience — Right Now!— we can topple the system. Flood the system. Crash the system.’ The message ended with a ragged AA monogram burnt into a flag and the sign-off: American Anarchy.

Their first attack was claimed by a spokesperson for the group named Xavier Cross who said he had close personal ties with key members of American Anarchy.

Full videos are no longer publicly available on the internet and can only be accessed by code-clearance members of the intelligence bodies, FBI, CIA and ICCS.

Footage is being passed hand to hand via bead drives and images with catch phrases from Xavier Cross have become common memes printed on clothing and across social media. 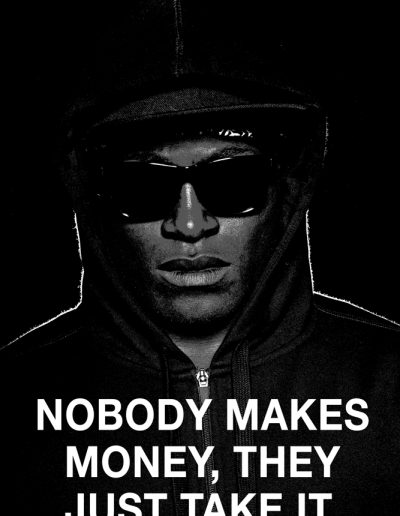 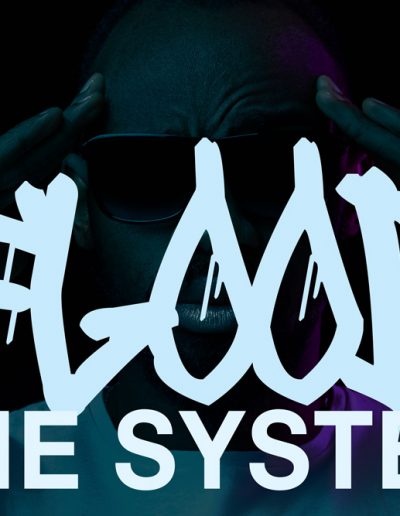 Tom scrolled through hundreds of image results. Most of solid black rectangles with capitalised words in a thick slab font.

The first and most popular of the memes read: ‘Crash the System’. Some had photographs of an African American man wearing sunglasses. There were a few repeating shots labeled as Xavier Cross. Grinning Xavier Cross. Shouting Xavier Cross. One where Xavier Cross was making a point with his finger straight towards the camera. Up-close Xavier Cross where he is looking over a tinted visor as if you are the biggest idiot in the world and it was his job to tell you.

There was a promoted link to a Bandstream account next to a portrait of a music group wearing black tshirts bearing illustrations of Xavier Cross in sunglasses with those you-idiot eyes. Their most popular track was: ‘You don’t make money, you take money’.

The bubble-wrap helmet grew harder, gripping his skull like a giant starfish.

‘You will feel an increased pressure. Try not to move.’

His eyes bulged under the squeeze, swelling like balloons. Black spots simmered over his vision, he felt the pulse under his scalp—then the tension faded away.

‘Your upgrade is complete. Please move to the decompression chamber.’

Those first moments as the filaments activated were clean and crisp. Everything he looked at seemed of heightened definition, every crease and pore of his hands, the way the lighting speared out from the bulbs and each direction it reflected. There were more colours than before and more distinction between them. The floor wasn’t just grey linoleum, it had multiple kinds of grey in it. The walls weren’t just white, each minor change in the light moved them to a hue all their own.

He sat in the decompression chamber, a weak hiss, a cold seat, his new senses normalising. Time too seemed more dividuated. He felt every second, his mind squeezing more thoughts into each moment.

That night, in a dormitory with forty other newly wired cadets Tom couldn’t fall asleep, he just lay there thinking and dreaming, getting attuned to the new gears of his brain.

Every day was just drill after drill. Visors on, lying back into your hammock, dropping into a remote and feeling your team ping in around you. Distantly he could hear the squad leader bellowing updates and pithy instructions. ‘Destroy the shooters. Immobilise the stalkers.’ ‘There is no need for mercy. You’re fighting machines not people.’

After the upgrades these exercise programs became effortless and easy. All the recruits were buzzing with new energy and the rush of the simulations; the faster they could go the faster the exercises went. His scores jumped, so did everyone else’s. Nothing seemed a challenge for them.

Six days on, one day of rest. Long shifts of relentless trigger work, buzzing through buildings, streets, mazes, landscapes, verify and shoot, verify and shoot; with the computer doing most of the work and the cadets waiting to press the button..

The AI recognition was fast and faultless at identifying threats, which made the pace such that he might only spend a minute at each location clearing out a dozen bots. His highest score was six hundred and forty two in one day, and he was tenth in the rankings of his squad.

At some point it became real, simulations became missions, but there was no distinguishable change. Just the same game with different settings and everyone’s scores reset to zero. On rest days, with his eyes closed, the flash of changing views still played.

In the mornings he learned to get up when the shouting started or he was tipped out. Before anyone else he would rush to the the camp toilets.

Here this were just plastic seats on deep holes. The stink was a constant reminder that many other bums had visited this place to release their waste in a spurting hurry. The food got the cadets in one of two ways, with the slops or with shits so toothy they chewed up your exit on their way out. He came early so he didn’t have to hear the sounds from neighbouring stalls; every squirt and slop from those who sounded like they were in a losing battle with their guts.

Drone vs Drone: the Saudi counterstrike

With its remaining oil fields under constant attack from insurgents and foreign interference, Saudi Arabia has activated two new auto-facs to build and deploy detonating drones in as effort to resume production.

In the hanger Tom rushed to plug in before the ninety-nine other conscripts. When you were first, you felt the others join you one by one; each a new limb of sensation in their group body. Plugging in last was almost too much awareness at once, like diving into the deep end of the pool and being overwhelmed by new sensations.

They ran missions until they plugged out at shift’s end and went to the mess. Lights went out in the common rooms and unlabelled bottles and unmarked pills were passed around.

Inside the canteen it was too loud to hear anything Tom followed Rachel behind a canvas curtain and found a group of cadets laying upon the floor, twisting and floating their arms through the air, playing with things unseen.

On a field bed a stubbly old dude with sleeved arms was bent over a younger woman. Tom stepped around to get a better view and saw the big guy delicately applying eye drops.

‘Now just relax and let it happen,’ the dude slurred and straightened back up.

‘How long does it take?’ the woman asked.

Rachel put her hand on his chest. ‘Lie down and  tilt your head back,’ she said. ‘Open your eyes wider.’

He looked up. Above him was an eye dropper and a drop of blackness bulging from its end. It landed with a splash of cold and he began blinking.

‘Open your other eye.’

Another black drop went into his left eye. The drop landed, vision dimming.

‘Now blink it around.’

‘Just wait. Everything is about to chaaannnggge,’ her voice slowed and slurred.

Tom breathed in through his nostrils for what seemed forever. His nose was vast and empty and the more he breathed in the more his head felt as if it was expanding and rising like a hot air balloon.

He was standing, lighter than air, his feet tied to the ground to keep him in place.

As he turned, slowly, he saw curly haired Rachel laughing at him. Colours smeared in his vision, growing brighter and brighter.

The drab room of insulated curtains was a pattern of joy. He felt giddy with happiness.

She was naked except for the visor over her face. Her fingers trailed over his skin. His skin held onto the touch, remembering it like lines of ink on the page of his chest. The lines circled and swirled on top of each other until he was covered in scribble.